Do I need to worry about my AMH level? 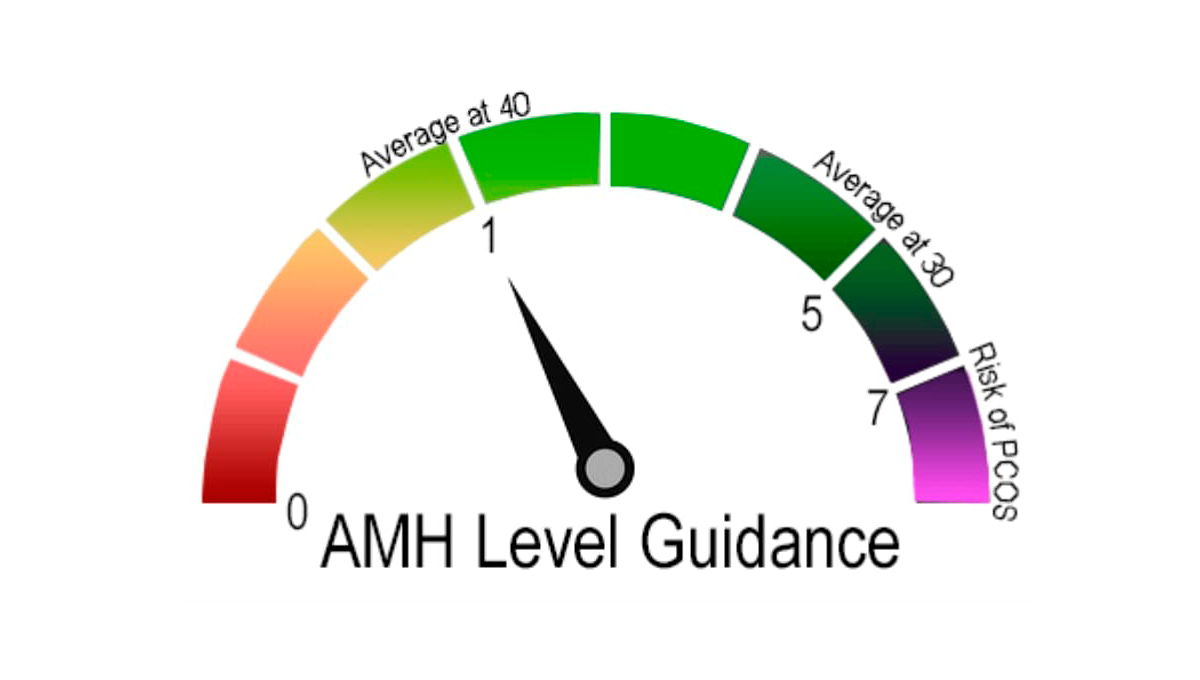 It is a protein hormone which is particularly important in women. This is because AMH plays a key role in fertility and it can indicate a woman”s ovarian reserve. See below for more details.

AMH is also important in men during their development as a foetus, as it is crucial for the development of the male reproductive organs. AMH is produced by the testes and the levels of this hormone decline in men after puberty.

The link between AMH and ovarian reserve

In women, AMH is produced by cells in the follicles of the ovaries. Ovarian follicles are small sacs on the outer layer of the ovaries. These sacs are filled with fluid, and they each contain an immature egg, or oocyte.

When a woman enters puberty, she will have as many as 400,000 follicles. Eggs develop inside the follicles until ovulation, when the follicle releases a mature egg for fertilisation to occur.

Primordial follicles are the microscopic follicles a woman is born with. These have not yet started to develop, and they lie in a “deep sleep” mode. This remaining supply of eggs is a woman”s ovarian reserve.

Ovarian reserve is a term which generally describes a woman”s egg count, and therefore it has important implications for fertility. This is because ovarian reserve can indicate how many fertile years a woman has left. Scientists have found that AMH levels are a good indicator of ovarian reserve, particularly when combined with other tests including an antral follicular count (AFC) which is an ultrasound test.

There have been many claims about the benefits of investigating AMH levels. AMH testing is useful in some circumstances, but it has its limitations.

AMH and the likelihood of conceiving

Fertility in women falls with age, particularly after the mid to late thirties 2 Pal L, Santoro N. Age-related decline in fertility. Endocrinology and Metabolism Clinics of North America. Internet. 2003. 32(3):669-688. Available from: https://www.sciencedirect.com/science/article/pii/S088985290300046X?via%3Dihub. AMH levels also vary with age, but they are not necessarily useful in predicting how likely it is that a woman will conceive.

Scientists have found that there is not a relationship between AMH levels and the likelihood of becoming pregnant naturally 3 Streuli I, Mouzon JD, Paccolat C, Chapron C, Petignat P, Irion OP, Ziegler DD. AMH concentration is not related to effective time to pregnancy in women who conceive naturally. Reproductive Biomedicine Online. Internet. 2014. 28(2):216-224. Available from: https://www.rbmojournal.com/article/S1472-6483(13)00533-6/fulltext. This is because fertility is complex, and it depends on other factors in addition to ovarian reserve.

AMH levels only indicate the number of eggs remaining. However they do not provide any information about the quality of a woman”s eggs. As a woman ages, the quality of her eggs falls 4 Navit D, Bergh RA, Williams MA, Garrisi GJ, Guzman I, Sandler B, Grunfield L. Poor oocyte quality rather than implantation failure as a cause of age-related decline in female fertility. The Lancet. Internet. 1991. 337(8754):1375-1377. Available from: https://www.sciencedirect.com/science/article/pii/014067369193060M and genetic changes reduce the chances of the eggs being able to develop into a healthy baby.

Therefore scientists argue that even if a woman has enough eggs remaining to continue to release one every month when she ovulates, she will not be able to have a successful pregnancy if the quality of this egg is poor. Unfortunately there is no test to measure egg quality before conceiving. The only tests available test embryos, and these are eggs after they have been fertilised with sperm cells and have begun the process of developing into a baby.

In addition to this, other factors are important in determining the chances of becoming pregnant. These include how healthy your partner”s sperm cells are in terms of their sperm count and motility.

AMH and the menopause

Menopause is a natural part of ageing, and it occurs in a woman”s late 40s to early 50s. At this point, a woman stops having periods and can no longer have children naturally. This is because all of the remaining egg cells in her ovaries have been lost 5 Broer AL, Eijkemans MJC, Scheffer GJ, Rooij IAJ, de Vet A, Themmen APN, Laven JSE, de Jong FH, Velde ER, Fauser BC. Anti-Mullerian hormone predicts menopause: a long-term follow-up study in normoovulatory women. Journal of Clinical Endocrinology and Metabolism. Internet. 2011. 96(8):2532-2539. Available from: https://academic.oup.com/jcem/article/96/8/2532/2834584. This is reflected in the levels of AMH in a woman”s body.

During childhood, the levels of AMH are low but they rise rapidly during puberty. AMH levels are at their highest in young adulthood. After this, AMH levels fall with age in line with the decline in the number of follicles a woman has. This reduction is particularly drastic in women who are older than 40 years old. AMH levels become undetectable during the menopause.

This means that AMH levels are a good method of predicting when the menopause will occur in women 6 Richardson SJ, Nelsen JF, Follicular depletion during the menopausal transition. Annals of the New York Academy of Sciences. Internet. 1990. 592:13-20. Available from: https://www.ncbi.nlm.nih.gov/pubmed/2197939. However the menopause is currently more accurately determined by a woman”s symptoms and the levels of Follicle Stimulating Hormone (FSH).

However AMH levels used in this context can be misleading. These tests only give an insight into how the ovaries are functioning at one point in time. They do not indicate how fertility will change in the future.

Therefore women who have a high ovarian reserve may be under the impression that they have plenty of time left to get pregnant. But in reality fertility is more complex than this and other factors, such as egg quality, play a crucial role.

In Vitro Fertilisation (IVF) is a method which helps couples with fertility problems to conceive. It involves doctors removing eggs from a woman and fertilising these with sperm from her partner in a laboratory. Doctors then return the fertilised egg to the woman”s body to develop and grow into a healthy baby.

Scientists have found that higher levels of AMH indicate higher success rates in IVF 8 Gomez R, Schorsch M, Hahn T, Henke A, Hoffmann I, Seufert R, Skala C. The influence of AMH on IVF success. Archives of Gynaecology and Obstetrics. Internet. 2016. 293(3):667-673. Available from: https://www.ncbi.nlm.nih.gov/pubmed/26449238. This is because it indicates a better response to ovarian stimulation. Ovarian stimulation is an important part of IVF in which doctors try to stimulate the ovaries to produce more egg cells. This allows the doctors to collect as many eggs as possible so that they can choose the highest quality eggs to fertilise in the laboratory.

High levels of AMH are present in women with Polycystic Ovary Syndrome, or PCOS 9 Zadehmodarres S, Heidar Z, Razzaghi Z, Ebrahimi L, Soltanzadeh K, Abed F. Anti-mullerian hormone level and polycystic ovarian syndrome diagnosis. Iranian Journal of Reproductive Medicine. Internet. 2015. 13(4):227-230. Available from: https://www.ncbi.nlm.nih.gov/pmc/articles/PMC4475772/. This is because women with PCOS have a larger number of small follicles in their ovaries, which means more follicles are producing AMH. Therefore AMH may be useful as an early test for PCOS in the future, following more research.

What does an AMH test involve?

The AMH test is a blood test. A doctor will take a sample of blood from a vein in your arm. No preparation is needed for this, and the test can be done at any time of the month as the levels do not vary according to your current menstrual cycle. Additionally, it does not matter if you are on oral contraception at the time that you take the test.

What are normal AMH levels?

AMH levels vary depending on a woman”s age. Therefore to interpret your AMH result, you will need to compare it to women who are the same age as you. Your fertility doctor will be able to provide you with more information about this.

What does a low AMH level mean?

If you are undergoing AMH testing in preparation for a fertility treatment such as IVF, a low AMH result means that you may not respond as well to ovarian stimulation. However this does not necessarily mean that the fertility treatment will not work.

How much do AMH tests cost?

AMH tests are not covered by the NHS. The costs of AMH tests can vary according to the fertility clinic, therefore it is important to do your research thoroughly beforehand. Generally AMH tests tend to cost around £70 – £120.

Overall there are certain situations when AMH testing can be useful. The test is particularly beneficial when indicating the success of fertility treatments such as IVF.

However AMH testing is not useful as a general indicator of fertility. If you have only recently started trying for a baby and you have no history of fertility problems, then you do not need to worry about your AMH level.

But if you have been trying to get pregnant for a few months, it might be a good idea to see your GP or fertility doctor. You can ask them whether AMH testing could help you, and they will also be able to recommend other fertility tests to gain a better overall understanding of your health.